Last Updated On Wednesday February 19th, 2020
This article contains references to products that we track and research from the Amazon Affiliates Program. We may receive compensation when you click on links to those products. For an explanation to our advertising policy, visit this page.

We also found 2 products that redditors have recommended that are the best alternative to this product or are related accessories.

I have finally decided to graduate from my french press and try something new. I am planning to buy a Baratza Encore for my grinder. These are the equipment I am considering:

A bit about my preference: I grew up drinking robusta coffee, so I have a liking for deep taste profiles. However, I have a palette for fruity/floral notes as well. I go to work at 6AM, so I need something easy but I am willing to put in effort for a good cup.

To be honest, I read the coffee wiki on this reddit, but I still cannot fully comprehend the difference in taste profile between these brewing gears. I know the Chemex and V60 can be versatile, with the Chemex creating a "cleaner" taste thanks to the thicker filter paper. However, I don't know what "cleaner" means. Aeropress and Moka pot can create "strong" coffee, with the Moka pot achieving that more readily than Aeropress. If anyone can clarify and be more descriptive with the taste profiles of these brewing techniques, it can help me narrow down my choices.

I want to get a gooseneck kettle but have a hard time picking one. My main concern is durability. I want this thing to last me for a while and not break down in 2-3 years. I worry about pricing as well but if it is worth it, I will get it.

- Stagg EKG: lovely, got all the features I want but that price tag makes me sweat. The + option gives me the chance to start it from my bed (can be a great motivator for my lazy butt).

- Bonavita: not as lovely, but got the features I need. However, have rusting issues/poor life span based from the reviews I have read.

- OXO: not as lovely as the Stagg, but features are practically the same. the wattage kind of makes me nervous. Price tag makes me slightly nervous too.

- Then this random one I found on Amazon: [electric gooseneck](https://www.amazon.com/gp/product/B07C3VF15R/ref=ox_sc_act_title_2?smid=A1HQMQ9PRQPPWV&psc=1). Don't know much about it, but it does not have the holding temperature option which makes me a bit bummed. Plus I got to keep an eye on the thermometer.

I've tried and quite regularly use V60, Melitta cone, Aeropress, and Moka Pot.

In terms of ease of learning and using, nothing beats the Melitta cone and the filters are everywhere. Plus, it's usually very cheap. The brown ones you get in the grocery store can taste a bit papery if you don't rince them consciously. Still, it won't take more than five seconds of your life. It makes for a slightly more bodied brew than other pour over devices but odds are that I couldn't distinguish it from a V60 in a blind taste. If you like playing and tinkering, though, it is not the funniest brewer all around. Nail the coarseness and water temperature combination to your taste (coffee should be ground fairly coarse) and bang, good coffee every time.

Aeropress is also very easy to use and allows for a lot more playing than Melitta cone. You can grind very find and infuse for a short time for a bit more body, ground coarse and infuse for longer for a bit cleaner brews (my favourite), and play with adding more or less water at each time, stirring more or less... Even though, once you've nailed a recipe it's pretty easy to replicate, which is useful at 06:00. If you're anything like me, any time before 07:30 I'll be doing things from muscle memory alone.

Moka pot is a strange thing for me. That's the kind of coffee I grew up with and I didn't believe it was possible to make good coffee out of it. It looks pretty uninvolved (dump grounds into container, put it on stove and wait) but you should pay a bit of attention to it or it will come overextracted, bitter, and nasty. As the filter is metallic and there is a tiny bit of pressure involved, it is a rather bodied brew which is somewhat close to espresso. Still, the ratio is pretty much determined (you can take it off the fire pretty quick and pour it when there's still water in the bottom chamber for a more concentrated brew but that's about it). If you want a heavier brew, that's your best option. Still, clean up is relatively annoying compared to the options above.

V60 is the king of tinkerers. Plenty of options abound to make wildly different brews. Still, it demands a lot of work on your side and drinks are difficult to replicate, compared to the devices above. If you value clarity but versatility and don't mind paying a lot of attention to what you're doing, go for it.

Chemex: never tried to use it nor tasted its coffee so I'll have to pass here.

French press: Not a big fan of its big body, as I find it muddles up the flavours. You can scoop away the oils (see Hoffman's method) but still, I'm not that convinced. Plus, cleanup is rather annoying and you'll almost always end up with grounds in your pipes. Not good long term.

I am looking to replace my current 10 cup coffee pot with a smaller one, does anyone have any budget recommendations?

If you're used to drip coffee, I can't speak highly enough of the melitta pourover cone. It's cheap, requires zero to no skill (the draw time is slow enough that even extraction is almost guaranteed, I've had cups almost as good as those made with the V60). Plus, filters are everywhere and cheap. Also clean up is close to zero as well: drop the filter in the rubbish bin and rinse the cone under running water.

Aeropress. Here things get more interesting (and slightly more expensive too). It needs a bit more fine tuning to find your preferred recipe, but it's my to-go coffee maker. Reliable, versatile, and easy to clean. It will (generally speaking) give cups that are slightly more bodied than those from pourover/drip but still very clean.

Moka Pot. The Bialetti ones run a bit more expensive but odds are you can get similar ones for a lot cheaper. That's the coffee I grew up with and I'm not a big fan of it, even though I have a small one for when I want something similar to espresso. You can do like your standard Spanish/Italian family and just pour water, coffee and put on your highest burner setting until the coffee stops coming out, but this will inevitably give burnt-tasting, over-extracted cups. However, if you pay enough attention you can get almost-espresso cups from it. Cleanup is a bit more annoying but still nowhere close to a French press. Also, the first three/four cups will taste like crap until the top chamber starts to get an oil buildup, so remember never to use soap on them and rince the top chamber with water once you've poured out all the coffee.

Ugh! I’ve been doing it all wrong, now that I’ve seen the fresh pour over coffee post! [R] 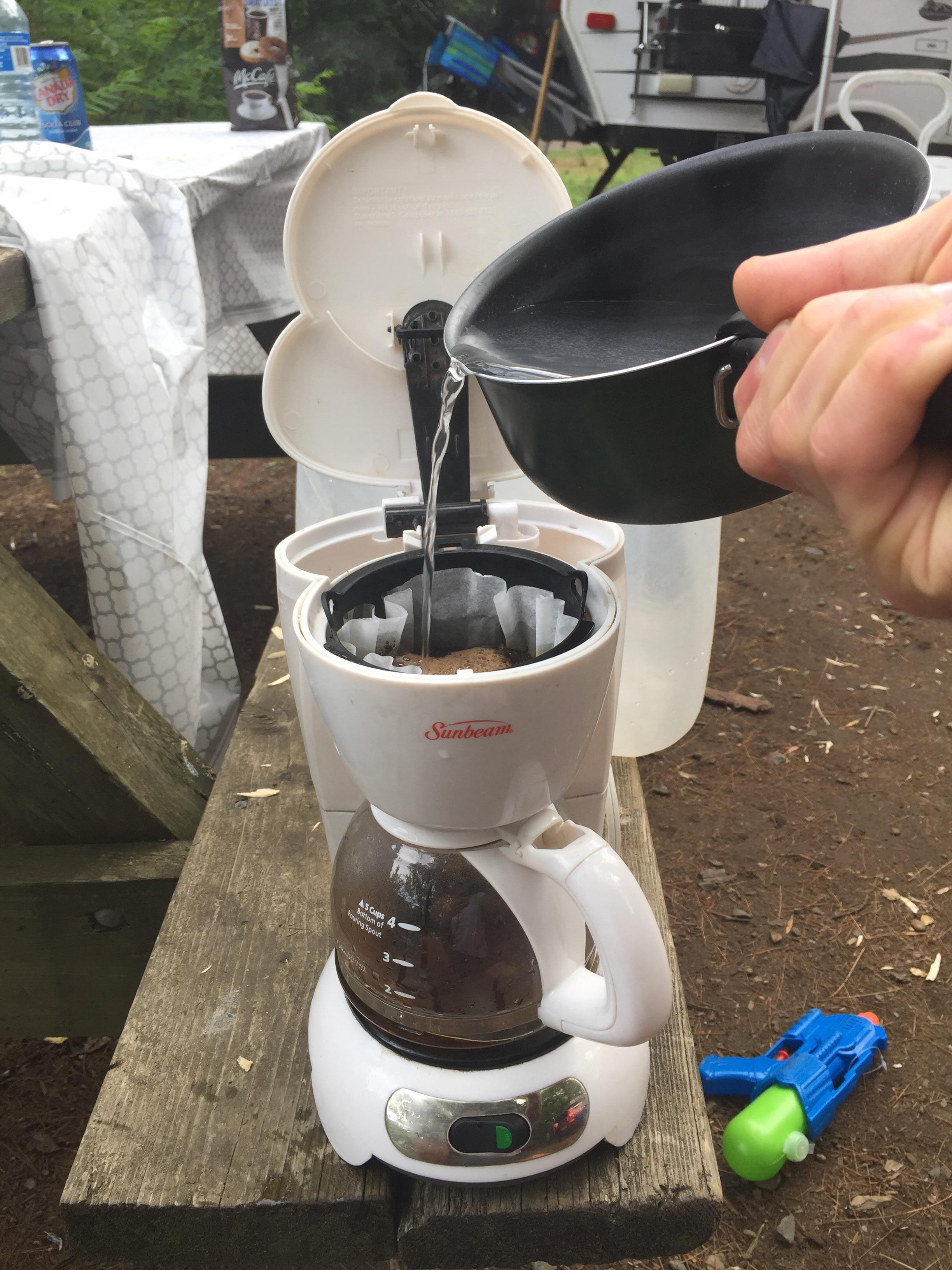 I have no intentions other than to help and inform. Many things I have learned from my own mistakes (best way to learn)

My tea making recipe will be listed below:

Make sure to use the BROWN filters. Do not use the white filters, or cheesecloth, or areopress, or french press. TRUST ME on this one. The filtering is the hardest, most tedious part, dont punish yourself, just get the brown paper filters!

Concerning the Taste of tea. Listen, I used to drink a pint of liquor everynight in my 20's. Liquor tastes horrific, but that did not stop me at all, not even the slightest. So I told myself that I will consume kratom tea like it tasted like liquor. This works beautifully. a few gulps of tea, then a few gulps of coffee/juice/something with a strong taste, and you Cant taste the tea. Basically I am using a chaser...

Basically what I do now is I add my kratom/shot of lemon juice/and just enough water to create a sludge. Then I set that to the side, and just boil a few cups of water separately. Then I combine the two, shake, and filter it.

Here is my tried and true new and improved method!

Next few steps are simple

Check out this $4.00 product sold at bed bath and beyond. Its the best tool that I have found for straining kratom tea. Ill also provide am amazon link:

Kratom is related to coffee, coffee is brewed and the remaining stuff is discarded. I have done the same with kratom daily for 8 going on 9 years now. I am perfectly healthy and life is good.

Link to Straining Equipment (this makes straining so much easier)

Link to filters (BROWN ONES!!) Dont use WHITE

UPDATE: you can find both of these items at your local Bed Bath And Beyond Store! At my local store I found them even cheaper than Amazon, and in stock same day!

Note, I have zero affiliation with these products, they are just what I use every day. I almost gave up on tea making due to difficult straining. IF you run into frustration from the straining step, go take a run over to your local Bed Bath and Beyond and I can almost guarantee this will help so much

Oh, it looked like a pod machine when I searched. Not sure where you are and what model you're considering. Sorry about that. I'm just not aware of any Oster coffee maker that's been tested to get water hot enough to make good coffee.

Maybe a kettle and something like this would be easier and make tastier coffee?

I'm a bit of a crazy who could probably go on for long enough to hit the character limit, but I'll stop it there to see what you all have to say! Both for your own controversial opinions, and any responses to mine. Remember, this isn't a thread for things we all agree on, so embrace the disagreement!

I'm willing to bend an ear on the Japanese fedishisim, but you are DEAD wrong about the Malita comparison. Malita is a lot closer to a Kalita wave. It's a partial immersion method. Furthermore, the Malita isn't any cheaper than the V60.